We have worked so hard to have these babies, to bring then into the world, to tend to their every need, change every diaper, answer every hungry cry. 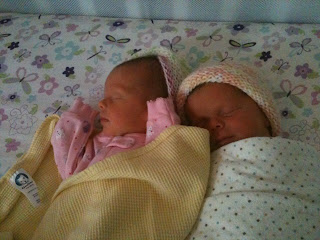 I have nursed these two people for six months. They have grown, thrived, turned into lovely, sparkly-eyed little beings. I have sustained them with my body from the second they were created.

And now, I’m taking the first step in getting them ready to live without me.

As soon as they eat something, as soon as they start opening their little bird mouths so spoons bearing rice cereal can enter, it feels like they are getting ready for bigger and better things. The Belle, in particular, has been eyeing our plates and our spoons for a couple of weeks now, watching intently as we lift food to our mouths. She has even started reaching for the fork and talking about it.

The Boy says, “Belle is saying, ‘Hey, what the dilly-o, can I get some of that??'” I’m not sure how she got such an urban swagger in his mind, but it’s funny, so we roll with it.

Even The Bug has been asking for food. We decided to let them have some rice cereal.

I kind of hate rice cereal. It’s gross. Seriously, who would want to eat that? It’s like pasty mush, and babies always screw up their faces at it anyway. Maybe that’s why we feed it to them, so they’ll make those faces and we can take pictures of it for their baby books? 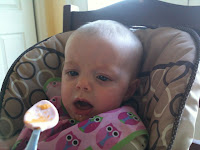 Anyway, we moved on quickly from the rice cereal (after waiting the appropriate days to be sure there were no food allergies). Both girls had sweet potatoes over the weekend and bananas yesterday. 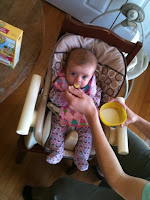 So far, neither seems convinced of the value of this method of getting calories. They will be nursing for a long time (which is fine with me). But the groundwork has been laid – they will eventually eat only solid food – and then they’ll grow up and go away to college!

(Okay, this is a jump…perhaps they won’t immediately go to college. Maybe they’ll go to kindergarten first. I will admit, though, that this second round of parenting an infant seems to be going at blazing fast speed. Days feel very long sometimes, but weeks and months are so short. I can’t believe we are already at the point of feeding them squished up food that real people eat.) 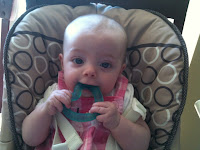 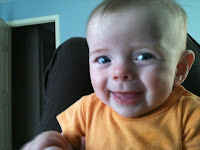 So we’re celebrating a milestone today…Happy Half-Birthday, Babies. We’ve come a long way. It has felt like a struggle more than a few times. Having a baby in the house can be that way. Having two of them at once is never easy, but these days, it often feels worth it.

Speaking of coming a long way, I crossed five miles for the week last week. This sounds like nothing, but it’s the furthest I have run in a week in over a year, so it’s worth celebrating!

Here’s to more milestones and more miles. Thanks for being along for the ride! We couldn’t have done it without the support we’ve had from all of you. In our case, it truly takes a village…and we are so grateful for ours. 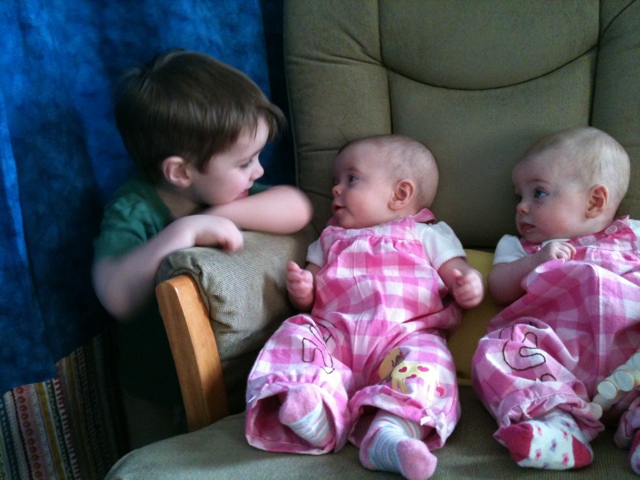