We are celebrating the feast of St. Patrick today, along with our friends in Ireland and all the honorary Irish people we know.

We read the story of St. Patrick this morning with The Boy, trying to rescue the feast day from the leprechaun-chasing focus brought on by preschool. I told him how St. Patrick was kidnapped by pirates and taken to Ireland, where he found his calling in telling the Irish people about God.

“Arrrggggh!” he yelled, running around the room.

Ah, pirates. I think this ended up being his main takeaway from the story. I made a note to try again later in the day.

We ate Lucky Charms for breakfast. Not authentic, I know…I found myself thinking longingly of the “fry” I’d had in Dublin a few years ago the morning of St. Patrick’s Day with George, just before we crowded onto the street with everyone else for the parade…but honestly- we have baby twins and a three-year-old. We do not have time to do authentic for more than one meal! And dinner is going to be the winner today.

We didn’t need to sell the Lucky Charms. The Boy has never had sugar cereal (other than Honey Nut Cheerios at his grandparents’ house), and he was thrilled. Marshmallows! In rainbow colors! I love how General Mills has plastered the words “Whole Grain” all over the box. They even point out that Whole Grain is the first ingredient. That means Lucky Charms are Healthy For You.

After breakfast, the day was laid back. George went for a long run. The Boy wore green from head to toe, including his underwear and, at various times throughout the day, his rain boots.

I waited until nap time to practice being a baker, putting together my first Chocolate Stout Cake (with a whole bottle of Guinness in it). I used a downsized recipe with two layers instead of three (we are both in training for races and do not possibly need a three layer chocolate cake sitting around here). Still, the frosting called for a pound of chocolate and two cups of heavy cream. Good thing we were planning for a run together after nap time. 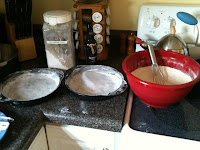 I mixed the dry ingredients, greased and floured my cake pans (which I might have used once before today?), and had just started cracking eggs and putting sour cream into the mixer when I heard wailing. 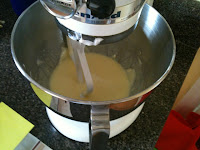 The Bug woke up just 10 minutes into my cake preparation, horribly offended that I was undertaking a baking project without her assistance.

Now down to one hand (since The Bug wouldn’t allow me to park her in her seat yet and my baby wrap carrier was in the wash with spitup all over it from an earlier incident), I melted butter in a saucepan and poured beer in with it. When the butter was melted, I stirred in the cocoa and waited for it to cool to room temperature. It seemed weird. If I hadn’t known from eating one that a chocolate stout cake was a heavenly thing, I would have been questioning the process at this point.

The Bug and I added the dry ingredients to the eggs and sour cream in the mixer, then poured in the cocoa/butter/Guinness liquid. The batter was ready to divide into the two pans. The recipe suggested weighing the batter to make sure that the pans had equal amounts (and helpfully noted that the raw cake batter weighs over 5 pounds for this recipe!). I have no kitchen scale. I’m an amateur, remember? I decided to eyeball it and hope that the luck of the Irish would be on my side.

The Bug was much happier now that she was my assistant. Her siblings slept right through the baking time, and the cake layers came out perfectly. 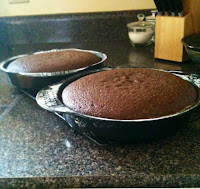 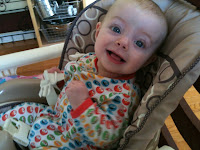 After some chatting about the calorie content of the frosting, George and I packed everyone up and headed out for a slow family run with the jogging strollers, alternating running and walking. (I’m up to 90 seconds of running for 1 minute of walking and feeling strong so far.) We stopped to stretch in the grass afterward, near a patch of clover. I decided to try again to tell The Boy about St. Patrick.

His face lit up. “Like Father Tom does!” he said. “Father, Son, Holy Spirit…,” he pointed to each leaf in turn, smiling broadly.

“You know what else?” I said, going back to the pop culture holiday stuff again. “If you find one of these with four leaves, it’s supposed to be really lucky.”

“Lucky is when good things happen to you.”

“Oh!” he chirped. “Like how I’m so lucky that I have so many Thomas trains to play with at my house. I bet not everyone has so many trains as I do.” George looked over at me, eyebrows raised. We shrugged. Sure, why not?

As I turned to pick up my water bottle and get ready to get everyone into the car, I noticed a four-leaved clover right there on the ground where we were sitting.

George said he knew one of us was going to, because it makes a good story. It just seemed to be that kind of day.

“Now we can be lucky!” The Boy grinned.

As we went home and prepared our (more authentic and better tasting) dinner of Irish Beef Stew and Soda Bread to celebrate St. Patrick’s feast, I thought about luck. Luck might be real. I know people who seem to have one happy coincidence follow another in what might be called luck. I also know plenty of people who seem to have the opposite, who could be called unlucky, whose lives seem to constantly have some trial or struggle. 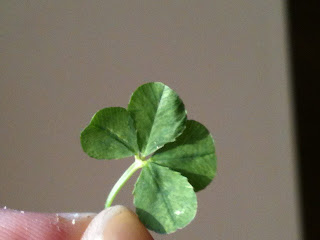 I think, though, that luck isn’t as important as realizing that what we have is pretty great. To look around at my family feasting on our dinner, to see the sun set behind the mountains out my kitchen window, to be able to rock my babies to sleep, to be on the receiving end of huge hugs and constant questions from my preschooler, to have a partner with whom to share the cooking and parenting (as well as the running and games of Mario Kart) – this isn’t luck. This is blessing. And my life is full of it. Even on the days when things seem to be totally…well, the pits. 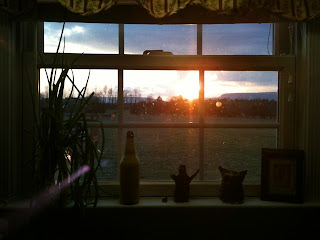 And so, on the feast of St. Patrick, here’s a blessing attributed to him. George gave it to me as a print one year as a gift, and this year, I hung it in the kitchen at the beginning of the month in honor of St. Patrick. May it be true for each of you.

May you be blessed with the strength of Heaven;
The Radiance of the Moon;
The Light of the Sun;
The Splendor of Fire;
The Depth of the Sea;
The Speed of Lightning;
The Swiftness of the Wind;
The Stability of Earth;
The Firmness of Rock.