I was not sure what to expect from this recipe. There was some negative chatter from some of the bakers ahead of time. One said it was tasteless. Another called it too dense. Several said they had lemon pound cake recipes they preferred, and some were even sharing them.

I’m still a baking novice (although with more experience than I had when we started!) – there is no way I’m going to be critical of a Julia Child recipe at this point, no matter how many other people say they didn’t like it. I had no reason to doubt it would be delicious. Besides, I’ve never made anyone’s lemon loaf…this is my first.

Since there seemed to be a general agreement that the cake could use something, I decided to make a lemon curd to have with it (just in case). At the suggestion of another TWD baker, I used this recipe from Ina Garten and found it fairly quick and not too difficult. I did have to turn my burner up to medium heat to get the curd to thicken. It turned out perfectly and is absolutely delicious.

The cake itself was a snap. The most difficult part was zesting the lemons. If I were going to make this on a regular basis, I would invest in a microplane grater to make that part easier. Between the curd and the cake, I zested six lemons. My little zester from Target has never seen this much action…it made zest, but it took a long time.

The reactions from George and The Boy were great. George, who is generally a lemon dessert kind of guy, gave the cake high marks on its own but felt the curd really made it special. The Boy said, “Mmmmm! Good! Yes, good. Very good, Mama.” The babies, who were eyeing the cake longingly, seemed to be asking why cake is excluded from the growing list of foods they are now eating. I did let The Bug taste a little lemon curd from my finger, but she was less enchanted than the rest of us. The Belle, not to be outdone, slurped her taste from her dad’s finger and immediately asked for more (which he gave her).

(Please advise the Natural Parenting Police that we gave the babies sugary dessert only a day after they turned 7 months old. Oh, how our smug parenting standards have fallen! I guess having twins will do that to you in some cases…and we must be one of those cases. Next thing you know, we’ll be letting them drink Diet Coke and watch Nickelodeon.)

I loved the texture of the cake and thought it was not as heavy as some pound cakes I have had. I did not have the cake flour it called for, so I used Gold Medal all-purpose (minus 2 tablespoons) and thought the result was just fine. I do think the lemon curd (and the strawberries I served on the side) rounded the cake out nicely and made it feel more like a complete dessert. That said, I would definitely serve the loaf on its own for tea or breakfast, maybe even lightly toasted with some preserves.

Or some more lemon curd. I have a whole lot of lemon curd left over. Any ideas what one does with lemon curd? We were thinking about making some crepes…what other ideas do you have?

Our hosts this week, Michelle at The Beauty of Life and Truc at Treats, have the recipe posted on their blogs.

Laura, my intrepid Nome-dwelling sister baker, is working (no, really!) in Las Vegas this week…stay tuned for the Western Alaskan twist she will inevitably produce at her blog, My Dog Parker. 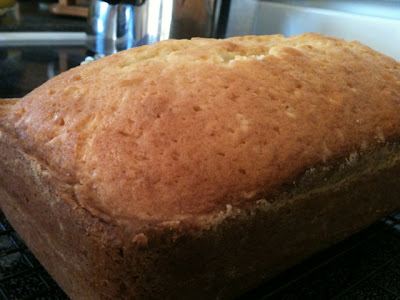 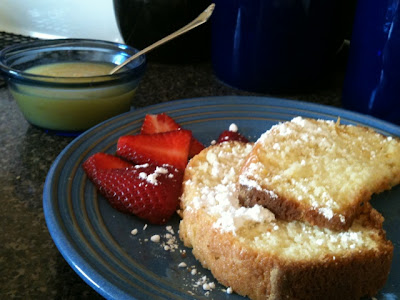 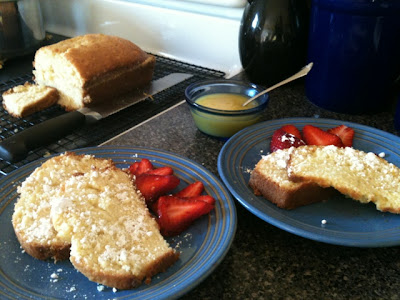