Skip to content
April 24, 2012 dereabbey
Today marks the first “name day” feast of the year for our family…the Feast of St. George.
Not a lot is known about St. George. He is reported to have been martyred by the Emperor Diocletian for his Christian faith in the year 303. Legend has it that he killed a dragon to save a village and was able to marry a princess because of his bravery. He is the patron saint of many countries, including England and Catalonia (in Spain). 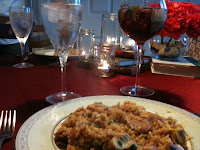 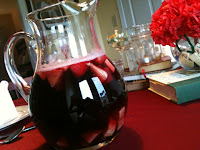 Not feeling particularly excited by any of the traditional English food options (and not owning a deep fryer in which to make fish and chips!), we decided to go with a Spanish/Catalan menu. We had paella with chicken and chorizo, sangria, and flan, all courtesy of George’s culinary skills.
It is traditional in some parts of Spain on St. George’s Day for people to exchange roses and books (as it is also the anniversary of Miguel Cervantes’ death). The Boy and I spent the afternoon making St. George’s flags to decorate our dining room and making some tissue paper roses for our table. We set them with some votive candles on top of some books as a nod to the Spanish tradition (and because it was more interesting to look at than having them flat on the table).
George has an interesting relationship with his namesake…being Mennonite and a pacifist, he can’t exactly get behind St. George’s military exploits and dragon-stabbing legend. For a long time, he had this print of St. George healing the dragon hanging in his office at church. We moved it to the dining room for the feast celebration. 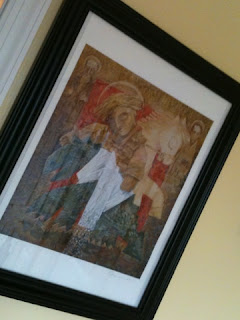 This feast will go down in history as a success, partially because it is our first feast celebration since the ill-fated Easter feast (which I will someday write a blog post about). Nothing shattered this time, and all the courses of the meal remained intact for us to eat them. 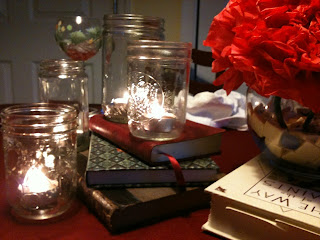