Yesterday was Christ the King Sunday, the last Sunday of the liturgical year.
For those of you unfamiliar with the church calendar, it runs differently than the “regular” calendar (January through December). The church (or liturgical) calendar begins with the season of Advent (the weeks that lead up to Christmas) at the beginning of December. Advent starts next Sunday, which means that this past Sunday was the end of the church year.
On the way to church yesterday, SuperSam talked with us a bit about what it meant for Christ to be the King. The whole “king” concept is a little outside of his frame of reference. We tried to explain words he might hear in the service, like “power” and “dominion” and “omnipotent.” He was, as usual, totally into the big words.
Finally, he summed it up: “So it’s like Jesus is the one in charge of everything, like the whole universe and the planets and galaxies and stars and constellations and everything there is and used to be and will be and is to come.”
Yes. That pretty much covers it.
Although church itself yesterday was mildly awful, with two horribly squirmy babies and one preschooler meltdown, SuperSam apparently absorbed something anyway.
This morning, he wanted to talk about it more and draw a picture of it…and this is what he came up with. 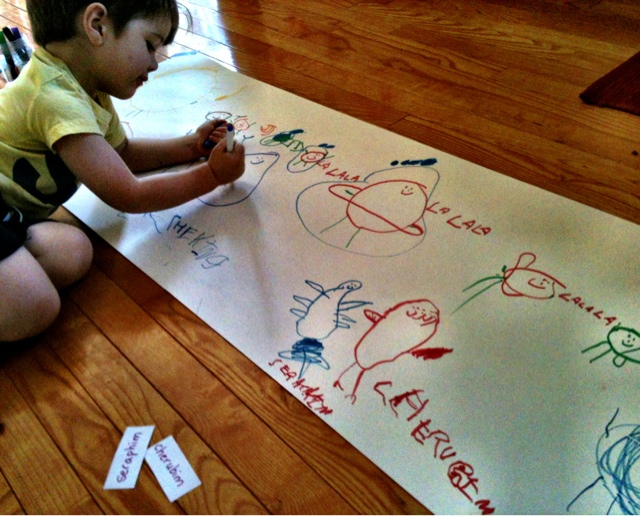 That is a drawing of all the planets singing “holy” and “la la la.” They’re all smiling. And those red and blue guys at the bottom are cherubim and seraphim (well, just a cherub and a seraph, since there is one of each). We looked up the definition, because I couldn’t remember what they were, exactly. Based on our research, SuperSam’s seraph has six wings and blue light coming out of it (because blue is the hottest light, he said) and the cherub has four faces (all smiling) and wings with eyes on them and feet like a cow (which are supposed to be like ox feet, but as SuperSam pointed out, he’s never seen an ox and we have cows in the field behind our house, so he knows what their feet look like). 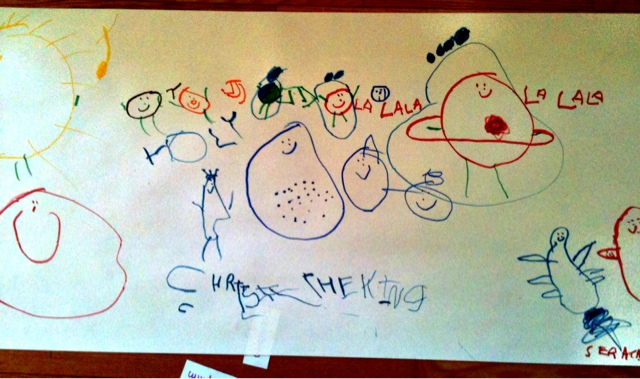 Christ the King is the blue guy on the left near Betelgeuse, wearing a blue crown and smiling, of course. And why shouldn’t he? Who could ask for a better party for the last day of the year?