We sat in a pew in the main part of the church that Sunday because we were actually on time. The Sisters were settled on our laps, and SuperSam was snuggled between us. There was some wiggling, but the children were content. We had made it through the opening hymn, the confession, the first reading. Just when we thought things were going pretty well, there was that moment. The moment when, during a quiet lull between Scripture readings, SuperSam burst out at full volume, “You didn’t bring me anything else to keep me occupied?”

Our parish usually has Children’s Church during part of the 10:00 AM Sunday Mass, and SuperSam enjoys his class there. In the summer, though, or if we have to go to a different Mass for some reason, he sits with us. I know it’s not developmentally appropriate to expect him to follow along with the entire Mass at 4 years old, but we feel that he gains something by being part of the gathered Body of Christ, even if he isn’t completely able to engage with everything that is happening.

My hope is that the sound of the music, the rhythms of the prayers and the responses will wash over him, imprint upon him, become part of his sense of what church feels like. He can kneel and stand and sit when we do, even if he’s not entirely aware of what it all means yet. Being part of the Mass with us, even as he’s staring up at the stained glass windows or watching the candles is slowly developing his liturgical awareness. Even taking part in small ways is growing his God-image and feeding his spiritual imagination.

The ways in which SuperSam participates in church are growing as he does. He always dips his fingers into the font on the way in and out of the sanctuary (though we have to lift him up so he can reach, which is no small feat while balancing a baby on one hip and the enormous diaper bag on the other!). He’s excited to offer the sign of peace to others, especially The Sisters. He loves receiving a blessing when we go up for Eucharist. He sings along with the simple, prayerful song that is always sung after we return to our seats. He likes to be the one to put money into the collection basket. He sometimes asks to light a candle for someone after church, especially if our family has been praying for that person at home.

And yes, sometimes he throws himself down on the floor in protest during the prayers and won’t get up, which usually leads to George and I hauling him up by his arms and holding his dead weight between us as we smilingly sing the Our Father. (Please, try not to stare. This could be your kid next week…or five minutes from now.)

Given how active SuperSam is, we have found there’s a real need for something that he can do, something on which he can focus during the homily and during the longer readings. So many words are spoken, and most of them pass over his head. Mass can feel incredibly long for such a small, squirmy, talkative boy.

With this in mind, I began searching the for items for our Mass bag. It’s a simple blue tote bag with handles like you might find at any craft store. It could be decorated easily with paints or markers (and maybe someday, I’ll get SuperSam to help me do this). For now, we have been using an extra bag we had around the house.

Some things I kept in mind when putting our bag together: 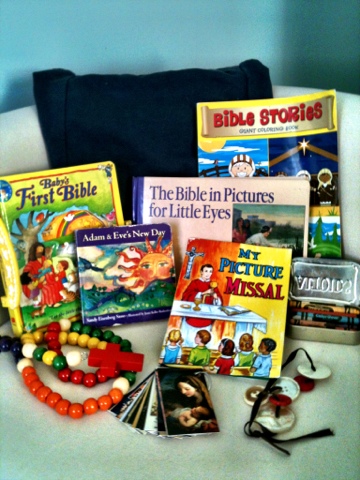 So far, here is what we have in our bag: 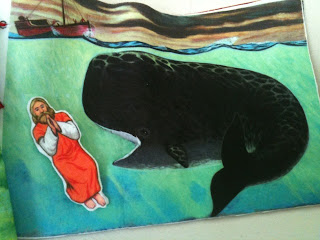 I’m thinking about making a photo book with pictures from the children’s baptism. I’d like to be able to rotate the items out so that the bag contents change somewhat. Especially in weeks with multiple Masses, sometimes the novelty wears off.

Do you have a church bag for your children? What’s in it?