Despite the growing number of Christmas trees lying in gutters across America (and a Cadbury egg display sighting by George this weekend at a local convenience store), Christmas is still in effect. Today’s the ninth day, and SuperSam and I finished up a project we started a couple of weeks ago.
Now that he’s discovered how much fun it can be to play with art materials and glue things together, SuperSam is kind of unstoppable. One of my favorite things is just to give him a pile of recycled stuff and say, “Hey, what do you think we could make with this?” and see what he does.
It was his idea to make a nativity scene out of paper tubes. I had been saving them for his rocket making, and when he asked for them, I assumed a string of rockets would soon appear. I was surprised when he suggested we make an angel instead. The angel turned out great, and then we were on a roll. We worked together since hot glue was involved – he picked out all the pieces for each character, and I helped with the cutting and the assembly as needed. The pipe cleaner arms were entirely his idea- he said that Mary ought to have arms “so she can rock her baby in case he gets upset.” (I love that.)
Yes, those are airplanes on the angel’s robe. And clouds. SuperSam definitely knew what he wanted in the costume department. (You can see how he got there, though.)
This isn’t one of those lovely tutorials about how you can make your own nativity out of cardboard tubes. Come on, you don’t need a tutorial. It’s easy and fun, and you should definitely do it – you have three whole days of Christmas left, so get busy!
We used toilet paper tubes or gift wrap tubes for most of the people, cutting them to appropriate lengths and adding pipe cleaner arms and clothes from scraps of fabric. We cut really small sections of tube for the sheep and covered them with quilt batting using Elmer’s glue. It was a sticky mess.
SuperSam did all the faces with magic marker. Most are smiling, and one king has a goatee.
Baby Jesus is made from an empty spool I had been saving. He’s also purple…wait for it…”because he is the newborn king, and purple is the color of royalty.” My son, ladies and gentlemen…the liturgical sponge (who somehow managed to absorb something in church even though he was lying on the floor making drum machine noises during part of the homily). 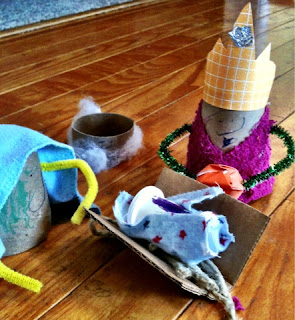 Here is one of the kings bringing the baby a present. (Notice the sticky, half-bald sheep looking on…and Mary, for whom we emptied out the fabric scrap bag searching for the perfect piece of blue flannel.)
After we completed the kings today, SuperSam played with the whole group for quite a while (until The Sisters got up from nap and threatened to eat some of the sheep). The kings ended up flying in from the end of the hallway on a spaceship “because we forgot to make some camels…we have, basically, none camels at this nativity”.
It was awesome. 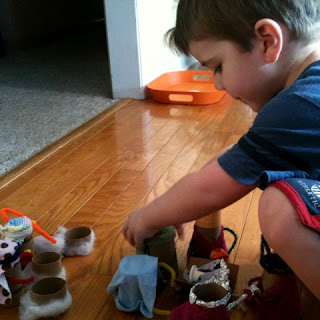 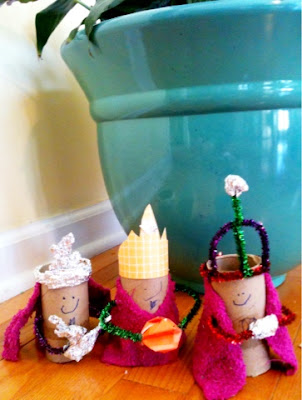