Cloud Dough…it’s the wonderful sensory dough you probably haven’t tried yet. (Probably. Have you tried it? I hadn’t heard of it.)

We found the recipe at Tinkerlab, where Rachelle has a great post about her experience making cloud dough with her two daughters. (She has a lot of other wonderful stuff, too – check it out if you haven’t before.)

We used flour and baby oil to make our dough. The original recipe calls for 8 cups of flour. We were smack in the middle of cookie baking season over here (meaning we were going through lots of flour already), so I followed Tinkerlab’s suggestion and cut the recipe in half (using 4 cups of flour and half a cup of oil).

Here’s what to do if you want to make your own batch of cloud dough: 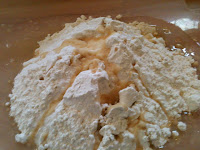 Put the flour in a container. (We used a large underbed-type storage box with a lid.) Form a mountain out of the flour, then make a crater in the top of the mountain like a volcano.

Pour the oil into the crater. 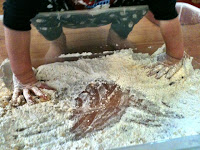 Use your hands to mix the oil and flour together until the mixture is crumbly.

Then play with it. That’s it. The more you handle it, the better the texture will be. It’s okay if there are some oily lumps and clumps…you can work them out as you play. You can mold it into shapes and sift it like powder. The dough has a soft, smooth texture, and it smells nice, too, thanks to the baby oil. 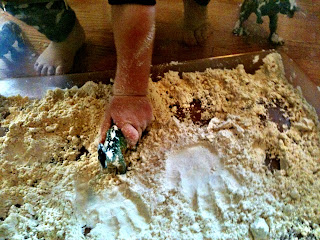 This project was fun. It was easy. And really, it was not bad to clean up. SuperSam made it snow on his dinosaurs. He made “snowballs” from the cloud dough and made the dinosaurs throw them at each other. He made handprints. His dinosaurs made footprints. Then he made footprints…because he wanted to see what the dough would feel like on his feet. And really, why not? The floor was pretty much covered in flour already. (I did put him straight into the tub afterward.)

We have been storing our cloud dough in the box with the lid on it for over a month now. Each time SuperSam has pulled it out to play with it, it has had the same great texture…it hasn’t dried out or gotten moldy or anything yucky that sometimes happens to these kinds of sensory doughs. 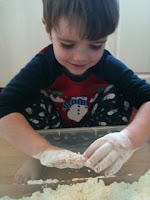 SuperSam’s evaluation: “Everybody should make this and play with it. It will work best if you have some dinosaurs or astronauts to put in there. I wouldn’t use your best cars or trains with it because they might get a bunch of flour caught in their wheels, and you wouldn’t be able to clean them very well because they can’t go in the bath. But you can always have a dinosaur wash if your mom will let you.” 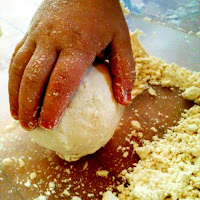