This year, I can hardly wait for Lent to start, mostly because life already feels so much like Lent-in-full-swing, and I like things to match.

We found out not quite two weeks ago that George is losing his job at the end of this month. (His last day is the same as Pope Benedict XVI’s, actually.) It’s not his fault, there’s nothing he could have done, he’s an excellent employee, they’ll make calls wherever they can and give him exemplary references, blah blah blah. It still feels like a kick in the stomach. His income is our only income right now. We need him to have a job.

On the outside, I handle it just fine. I’m a total pro at improvising and going with the flow. I can change directions quickly and look like I always meant to do it. On the inside, though, it eats at me. I feel anxious and sad. I have dreams about drowning. I speak irritably to my son and roll my eyes at my husband. I drink too much Diet Coke.

It’s my nature to want to control things. I think it’s the curse, the “shadow side,” maybe, of being an organized person. For things to run smoothly around here, I have to be on top of them…and when something as big as this gets pulled out from under me, I’m suddenly on top of nothing with everything about to come crashing down on top of me. It’s not a comfortable feeling. I compensate by cleaning the kitchen sink a lot to make it shiny and rearranging the annoying corner cabinet that holds all the plastic food storage containers and their matching lids.

(I can never get that cabinet the way it ought to be.)

Not all of us are feeling so dragged down. In a recent creative explosion, SuperSam has been using his magic markers like there’s no tomorrow. Watching him might be fun for some of you- maybe even for me at a different time- but right now, it makes me cringe a little inside. He uses tiny, thin-tip markers to color brashly in big spaces, staining the paper with the abundance of bright-colored ink pouring out of the tip. He scribbles hard with crayons until the points are gone, broken off or worn to a nub. Recently, I needed a marker, and although I have my own set (kept in a separate place, of course, out of the reach of children), SuperSam held up a marker to me. “Here, Mama, use mine,” he said, smiling. 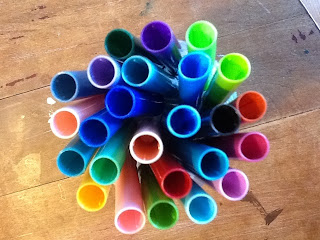 As I took it, I marveled at him…this generous, wide-open kid who uses art supplies with such gleeful abandon. He never worries that his markers will run out of ink. He’s not afraid that he will exhaust his supply of crayons or stickers. He’s not fearful, not anxious – he mixes all the paint colors together right now because he wants to see what will happen right now. He’s not concerned that he might need blue paint again and not have any left to use. He’s free, because he’s sure that there’s always going to be enough.

This Lent, more than any other one before, my challenge is going to be to sit and wait and not give in to fear. To gradually unclench my hands and let go of the anxiety, the need to control everything, the constant aching worry that it’s all about to come unraveled. To stare at the darkness in myself without being sure of when or where or how the light will show up…but still to trust that it will eventually show up. 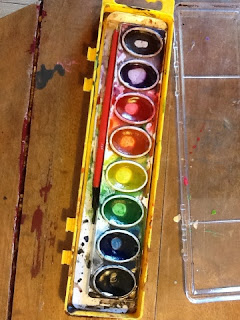 Somehow, I think if I can just get to Lent, I will know that millions of other people are there, too…walking through deserts of their own, pouring out the extra stuff so they can sit like empty vessels waiting to be filled.

The emptying is never the fun part, whether self-induced or life-induced. Paring things down, giving things up and putting things aside doesn’t feel like it is going to make us happy. In the long-run, though, it is through this process of cleaning ourselves out and opening ourselves up that we can freshly encounter the Holy…that we can be restored and refreshed…that we can find real, deep Joy (which is better than mere happiness any day).

I don’t feel joyous.
Come tomorrow, though, at least that will be liturgically appropriate.

The other day, as we were out running errands, we passed a church sign that said this:

Are you living in the shadow of the Most High God?

I was prepared to be totally annoyed. Pithy church signs nearly always irritate me. I’ve even been known (in my more reactionary, younger days) to write letters to pastors of churches whose signs I found particularly offensive or frustrating. I waited for the irritated feeling to show up…and I was surprised when it didn’t come. Instead, I found myself saying, “Yeah, actually, I am living in the shadow of the Most High God (even though I’m not much aware of it recently).”

The idea that the Most High God has a shadow big enough to live in was somehow comforting. The situation didn’t change. There was no good news. We didn’t have anything additional to assure us that things would be okay, but somehow, we felt less worried that they wouldn’t be. George said, “I may not believe things are always unfolding as they are meant to, but sometimes, the sounds the Universe is making are artful. It is music.”

It is, indeed, music. 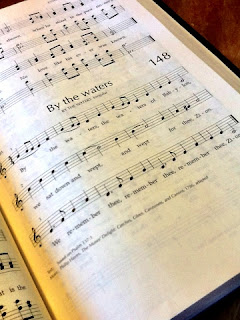 The music is not always upbeat- right now, it sounds like mournful chant- but singing along is a sign of faith in the big-ness of that shadow. I am making the decision to join in the song, however shaky my voice may be right now. I don’t know how things are going to turn out. I’m not up for any platitudes about how everything works out for good or how God is going to take care of us according to His purpose. This might just be one of those things that sucks, something we just have to survive. We will survive it, though…and when I say “survive,” I don’t mean in a “barely squeak by” kind of way. This Lent, I’m doing more than just living in the shadow of the Most High God.

I’m singing there, however quietly…and I know The Most High God can hear me.

This post is part of a linkup hosted by Carrots for Michaelmas, Molly Makes Do and Dualing Moms. Follow this link to see some other great posts about the fasts, feasts and celebrations of Lent.