So, there’s this photo linkup at Clan Donaldson where people are posting photos on a theme. I’ve been lurking over there, looking at other people’s photos, and not posting any because I’m not really a photographer – my sister is the photographer – I just like taking pictures and I don’t even have a real camera really I mostly just use my phone and the pictures really aren’t that good but I like them.

I’ve decided that if I want to take better photos, maybe I should take them more on purpose and show them to people. So here goes.

Today’s prompt was Architecture. I was at home all day with three little children in a house that was built in 2005. Not much to see in the way of architecture, really…so I had to be a little flexible in my interpretation of the theme. I hope you’ll forgive me. 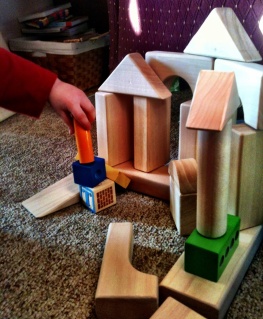 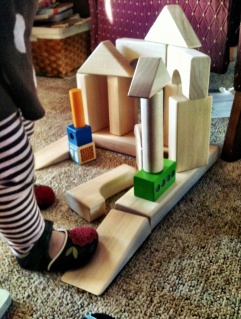 You might be wondering what happened after that last picture. You might guess that the little sister, wearing her new shoes, kicked the towers and knocked down the building.

SuperSam, in a fit of “oh-no-you-are-NOT-going-to-knock-down-my-building-sister,” kicked down the building himself and threw the blocks halfway down the hall. Take that, sister. Now there’s nothing for you to knock down.

Oh, and then they both cried inconsolably.

Thankfully, it was almost dinner time! Time to clean up the blocks.

This moment brought to you by Theme Thursday and the letter K. Go on and check out the other photographers’ stuff.