On a truly cold day, outside play is not practical for our family. Lucy isn’t walking yet, so she gets really cold if she’s just sitting in the swing or being pushed in a ride-on vehicle. SuperSam dislikes wearing coats or anything with long sleeves, so clothing ends up being a battle on particularly cold days. And Nora won’t leave on her mittens, so her hands get cold quickly. I’ve heard it said that there is no bad weather for playing outdoors, just bad clothing, and I generally agree…but if the children in question won’t wear the appropriate clothing, it’s hard to make it work.

So, on a recent bitterly cold day (when everyone was cranky and bouncing off the walls), I pulled out the giant cardboard packing boxes I’d been saving since Christmas. Add a box cutter, a roll of duct tape, and some crayons, and we had a morning activity waiting to happen.

I assumed we’d build a fort or a playhouse of some type, and I started putting the boxes together with that in mind. End to end, we had about a refrigerator box and a half’s worth of cardboard real estate with which to work. The Sisters set to crawling in and out of the boxes immediately. SuperSam grabbed some bubble wrap, held it up to one end of the boxes, and said, “This can be the windshield. It is thick enough to withstand the rays of the Sun when we do a flyby.”

That’s when I realized we were actually building a rocket. (Silly me.) 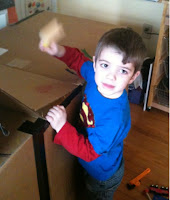 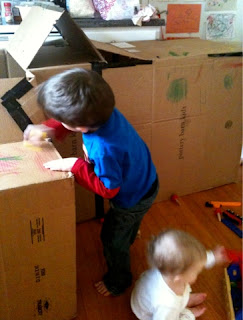 SuperSam got out his tool box and passed out hammers and screwdrivers to The Sisters, and they all started happily banging away. I cut some windows in the boxes and taped everything together while SuperSam added some coloring and numbers (“like NASA has on their rockets”) to the sides of the structure. Then Captain SuperSam and I made a seat out of a smaller box so he would have a place to sit in the cockpit. He insisted that Navigator Nora have a seat, as well, and I persuaded him that making one for Lucy would be the kind thing to do. (I don’t know why Nora gets all the best gigs in these situations.) 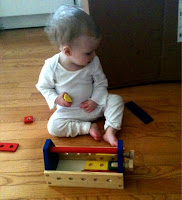 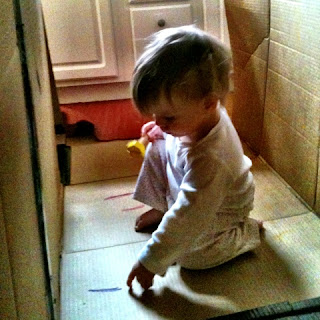 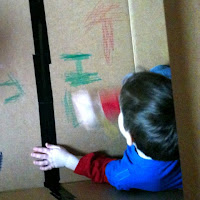 Finally, we made a control panel by gluing buttons and knobs (caps from gallon milk jugs and various bottles) on the bottom of a little box. The spacecraft was ready for flight. 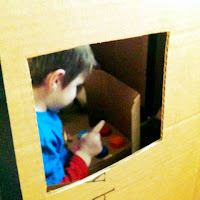 The children played in it all week, first in the kitchen, where we had built it, and then later in the living room, where it took up almost all the floor space. It is currently stationed in SuperSam’s bedroom, where it will remain until he gets tired of playing in it. He tried to fit his bed inside, but the box wasn’t quite big enough for that. He did take a nap earlier this week just inside the opening of the rocket on the floor. “I’m training to be an astronaut,” he said, “so I might as well learn how to sleep in a rocket.” 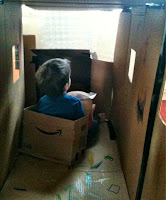