Skip to content
April 22, 2013 dereabbey
I am not sure why I never thought of this before, which is why it is our newest “Best Idea Ever” post.
We got a small toy stove/sink for SuperSam the Christmas he was 2 years old. He has enjoyed playing with it some, but it never got as much use as we thought it might (given how much he loves to bake).
As we have been rearranging our house a bit (moving out baby things, like bouncy seats and swings, that we no longer need), I decided to put the toy kitchen in our actual kitchen. I added some extra spoons, measuring cups, and bowls. Because reading is life and books belong in all kinds of play scenarios, I also put some books in this new play area- a kids’ cookbook, a cute story about baking a cake called It’s My Birthday

by Helen Oxenbury, and Eating the Alphabet

by Lois Ehlert (which has great illustrations of fruits and vegetables from A-Z…it makes me hungry every time we read it). (Those are Amazon affiliate links, FYI.) 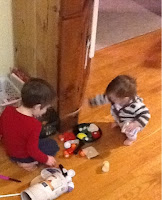 Within 20 minutes, SuperSam and Nora had discovered the new setup and were playing with it…together…and (minor miracle!) neither of them was screaming or hitting. SuperSam put food in a pan, and Nora stirred it with a spoon. He put plastic eggs in a bowl, and she beat them with a whisk. He said, “Nora, you can be my sous chef,” and she grinned and clapped her hands like someone had offered her some ice cream. Amazed, I made lunch. No one hollered while I did it. No one asked me to intervene. No one smacked his sister. No one beat her head on the floor in frustration because she couldn’t have the toy she wanted. They were engaged, happy, and productive…together. 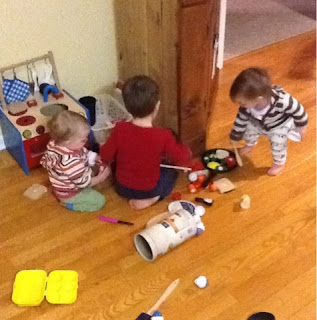 After a few minutes, Lucy joined the party, choosing to play with the empty spice containers. SuperSam showed her that she could open them and smell them. Lucy proceeded to take every spice container out, open the top (or ask SuperSam to open it for her) and smell it with her nose wrinkled up, pressed against the lid. It was adorable.
They were all quiet and content, busy with their work for the 15 minutes it took to get lunch prepared. I had to pull them away from their play to eat, and as soon as lunch was over, they were back at it again. Lucy discovered the books (her favorite pastime) and started flipping through the cookbook, and SuperSam guided Nora through the steps of making a smoothie pictured in one of the recipes.
Of course the play kitchen should be in the real kitchen at our house. Why didn’t we think of that before? Have you ever had an unused toy or play area become suddenly popular with your kids just because you moved it? (And do you have any suggestions for more food or cooking-related books for our new kitchen play area?)