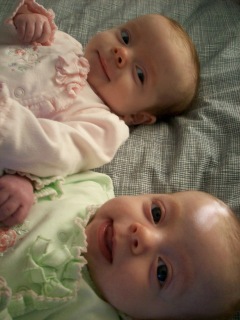 I have learned that there is a Big Secret about having twins…a giant, hidden truth that no one told me.

In your defense, most of you couldn’t have told me. You don’t know, because you don’t have twins.

Even if you were one of those people who always thought you wanted twins, even if you imagined every day how fun it would be to have them, you don’t really know. The only people who know are people who have twins.

Why didn’t any of them tell me?

Probably because they didn’t want to scare me to death.

The thing is, as a parent of multiples, when you see a frazzled, exhausted twin mom struggling with her two tiny babies, you don’t want to tell her the Big Secret. You say something encouraging. You tell her she’s doing an amazing job. You tell her that having twins is a joy and that it gets easier.

These things are true. It does get easier, and there are joyous moments that make all the struggling seem worth it. Once you get through the tiny baby stage, they grow a bit and don’t need to eat every 3 hours. You can put them in their bouncy seats facing each other, and they entertain each other. Once they can sit up, things get even better. You can put them on a blanket with some toys, and they will be happy for a few minutes…long enough for you to take a shower, unload the dishwasher, or make a sandwich for your preschooler. After a while, they make each other laugh. They keep each other company. They hold hands while they are nursing. They chatter to each other after you’ve put them to bed until they fall asleep. Eventually, they even sleep all night long, which means you can, too.

What you don’t tell that frazzled mom (and what no one told me) is that it also gets way harder.

There’s really no way around it, because the best-case scenario is that you and your twinfants survive the baby stage and make it to Twin Toddlerdom. That’s what we want, right? We reach their first birthday and pat ourselves on the back and think, “Wow, we did it!” – and we are so happy to have made it through the first year that we hardly think about what lies just around the corner. 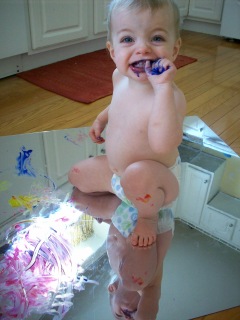 There is a reason why most people only have one toddler at a time. Toddlers are impossible by nature. They are fascinating, stubborn little people who are driven to explore their world and have no idea what is safe and what isn’t. They scale bookcases. They pull all the pots and pans out of the cabinets and put them in the laundry hampers. They pull coffee filters out of the trash can and pretend to cook with the old coffee grounds. They put socks into toilets and flush them down. They unroll all the toilet paper and trail it all over the house. They put everything into their mouths: sand, play dough, used band-aids, rocks, bugs, old french fries they find under the seats in the van. They steal car keys and hide them in the diaper pail. If you stop toddlers from doing any of these things (or anything, really), they take it as a personal insult and release their special brand of toddler fury on you, kicking and screaming and wailing and biting as though their anger and frustration will never end. 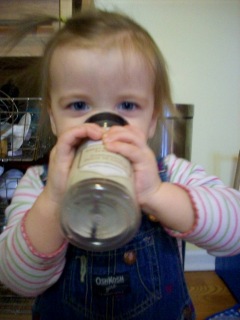 Anyone who parents a toddler deserves a medal. Every day. And a standing ovation. And as much ice cream as she or he can eat.

Having two of them at a time means that I never seem to have enough hands. It means I get more helpful advice from books about handling groups of young children in a classroom setting than I do from parenting blogs. It means I need classroom-like routines for everything from diapering/pottying to hand washing to going bye-bye to cleaning up toys. It means I need to have the most childproof house on the planet. And it means that if there are more than 45 consecutive seconds of silence when the children are awake, I have to run as fast as I can to find out what mischief they are causing…because they are always, always into something they shouldn’t be.

Granted, infant twins are a lot of work, too. It takes a long time to get them ready to go out. It takes a long time to feed and bathe them. It’s a big challenge to get them eating and sleeping on the same schedule (so that you occasionally have time to eat and sleep, too). You feel sometimes like all you do all day long is nurse and change diapers. Sometimes they both cry heartbreakingly at once and you feel crazy because you can’t possibly tend to them both at the same time, no matter how badly you want to help them feel better. But baby twins stay where you put them. Even when they start moving, they crawl slowly at first so you have time to catch up with them. They’re courteous like that.

Toddler twins are crazy. They never stop. They go and go and go and go all day until they crash. They want everything NOW. They want all the toys, and they hit and bite each other so they can protect what is theirs. They run away when you try to put diapers on them. They take their diapers off and smear their poo on their beds and walls. They put food in each other’s hair. They yell, “NO-NO-NO-NO!” and stamp their feet when you say anything that displeases them (which, some days, is nearly everything you say).

Those of us who are parenting more than one toddler at a time deserve more than a medal. We deserve a vacation…without the toddlers. Since we can’t have that, we are at least entitled to some sympathy and understanding from the general public.

So please, the next time you see us at the store or at church or standing in the middle of a parking lot mid-tantrum and I look exhausted and two of my three children are screaming their heads off, just smile and say something supportive. Better yet, ask how you can help. Don’t say any of the things on this list. And please, don’t give me any advice unless you have already survived this stage of twin parenthood…in which case I’d like to have your phone number on speed dial.

This has been a public service announcement on behalf of twin parents everywhere.