Sometimes, I find myself wishing that once, just once, he would use something the way it was intended.

That tangle of plastic pieces up there? It’s a marble run.  A quiet, self-occupying marble run. Only it isn’t a marble run to him- it is a marching band. It is the polar opposite of quiet. The pieces are all over the house, turned into instruments worthy of inclusion in a Dr. Seuss book. He outfits his sisters with their own euphoniums and off they go, doot-dee-dooting the Superman theme at full volume until it rings off the hallway walls. 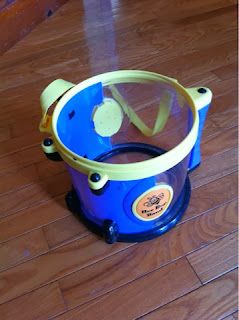 Or this? It only looks like a drum. It’s really a helmet. It used to be a space helmet, but now it’s a knight’s helm. Last week, when Nora wanted to play the drum (you know, with a drumstick, to make music), we couldn’t find the drum head. Eventually, someone discovered it in the box of costumes and dress up stuff.

Because it’s not a drum head anymore. It’s a shield, of course…covered in foil and made wearable by criss-crossed rubber bands. The drumstick is a “pixie sword,” an overturned pink plastic teapot lashed to its top with the tiebacks from his bedroom curtains.

There’s never any toilet paper in the bathroom any more. It has been turned into bandages for wounded armies of interplanetary soldiers engaged in a battle between good and evil. When the fate of the entire universe is at stake, how can I begrudge someone a roll or two of toilet paper?

In my heart, I know that Exceptionally Large Quantities of Wasted Tape and Entire Rolls of Aluminum Foil are a small price to pay for a mind that sees the world in such a wide-open way.

To SuperSam, life is only endless possibilities. Every object in this house is a potential idea waiting to be realized.

To me, sometimes those possibilities just look like a big mess.

It’s a struggle for me. I like things to be neat. I’m not nearly as neurotic about it as I used to be, but messes make me grouchy. Clutter makes me feel like the walls are pressing in on me. When every inch of every surface in the kitchen is covered with works in progress and piles of paper, I feel like I can’t breathe deeply.

My son is so different from me.

This is SuperSam’s workspace (photographed to share with his permission).

On his worktable, currently: seashell collection, assortment of bouncy balls, microscope and scattered slides, cardboard box that was briefly an airport and is awaiting its next role, dinosaur fossil excavation in progress, copy of “Jesu, Joy of Man’s Desiring” highlighted alternately in blue and green crayon. Nearby, but outside the margin of the picture: styrofoam painted yellow to be a yellow submarine, characters and props for toilet paper tube staging of Orpheus and Eurydice (complete with boat made from an egg carton for crossing the River Styx), plethora of recycled materials (tubes, boxes, styrofoam, egg cartons, plastic containers- some of which contain dead bugs that are being “preserved” for later study).

The main reason he has his own workspace (in a room that’s not his sleeping space) is because he needs to be able to leave projects unfinished and come back to them later. His timetable isn’t like mine- he’s not ready to clean things up just because it’s time to make dinner in the kitchen. I realized that to make this project-based homeschooling arrangement work for us, he was going to need a space that could house his ongoing work. There are usually at least three projects going at once. Sometimes he works on them simultaneously. Other times, he takes breaks from one to pick up something else for a while and then returns to the original idea when he’s ready.

We gave up our mudroom so he could have this space. It has to be in a separate room with a closeable door precisely because of how he keeps it. Mess and clutter don’t bother him. He thrives on having everything out in the open where he can seize it in a moment. He needs to be able to instantly react when a bolt of creativity shoots through him.

I just need him to be able to find his own shoes…and I need to be able to close that door and pretend that the visual evidence of his brain-in-perpetual-motion isn’t there.

All the beautifully organized, Pinterest-worthy toy storage and art table ideas in the world can’t save us, I fear. We are two different kinds of minds. I take joy in organization and planning and using little galvanized steel buckets with labels as storage containers. He takes joy in living and thinking and working full-throttle…and for him, that means putting things away is a low priority.

The thing is, I also take joy in seeing how he works. He amazes me almost every day. Even when I find him maddening, I’m in awe of his brain and of the ideas that come out of it. It’s an amazing brain, and watching him use it with such delight and freedom is a privilege.

I doubt I’ll ever see the mess as a privilege…but I’m working on being less irritable about it.