So, for all of you who have been worrying about our fish and our children after the aquarium incident, I’m pleased to report the following:

Just after I wrote my post about The Boy’s fishing escapades, I sent an e-mail to the amazing Amy of Mama Scout, who makes the Mama Merit Badges. She likes to hear stories from parents who have badge-worthy experiences. I thought my story qualified, and I wanted to share it with her.

To my great excitement, Amy wrote back and said she was sending me my very own Tantrum Badge…for not having a tantrum. (If you didn’t catch the original story, you should go back and read it. I believe a tantrum was justified. I have certainly had them in less extreme circumstances.)

Before Amy could send my badge, though, my lovely friend Karen got one for me and mailed it to me herself. What a wonderful surprise!

I am sewing it on our diaper bag. I hope people will ask about it so I can tell them about Amy’s badges…it makes me smile every time I look at it. (Thank you, Karen.) 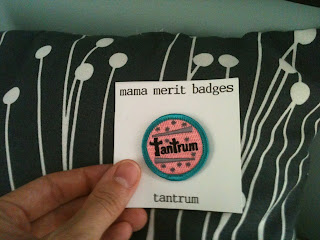 There is cosmic benefit in sharing these kinds of stories. A whole tribe of parents know the feeling of surveying the wreckage after some mishap, eyeing our offspring and wondering what possessed them to do what they did. We can all use some knowing nods, sympathetic words, and pats on the back on those days. Parenting is a full-contact sport. We need involved spectators to cheer us on when the going is rough. 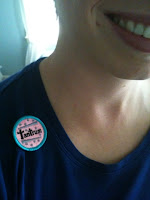 Thanks, everybody, for your support of our family and for following our adventures with this little blog. It’s nice to have your company as we figure out what the heck we’re doing.

Today, I found myself still in my pajamas at 4:30 pm, making coffee and wondering how I was going to survive the rest of the evening until bed time. I had that slightly manic feeling that comes with a whole day of managing (but just barely managing) chaos and putting out fires, and I wasn’t sure whether to laugh or cry. I thought about sitting down in the kitchen floor with the coffee and the carton of ice cream and doing both at once.

Sometimes, the best way for a worn-out, overwhelmed mama to cope is to bring another equally exhausted, slightly crazy mama and her brood into the picture. Somehow, combining our chaos makes the chaos seem more manageable. I’m not sure why this is, but it always seems to work. There’s often not much chance for adult conversation in these playdates, but the kids distract each other, and the mamas can at least look into the eyes of someone else who knows exactly what it feels like to have this kind of day.

Enter my dear friend and her three children, whose ages line up nicely with my children’s ages. Babies on the floor together with a basket of toys, preschoolers playing contentedly, we were enjoying each other’s company and actually getting to finish sentences.

We should have known something was up. It was awfully quiet down the hall…

When her three-year-old daughter appeared, wet hands holding a measuring cup with water in it, we looked at each other and moved quickly toward my son’s room. There, we found him standing on his toy box, both arms in our 20 gallon fish tank up past his elbows, chasing the fish around with the bottom of a bright green barrel of monkeys container. (One can only guess where the monkeys were.)

The poor fish were darting around the tank, panicked, eyes wide. (Yes, okay, the fish always have wide eyes, but I’m sure I saw terror there this afternoon.) They probably thought it was the fish apocalypse or something. All the plants had been uprooted, and the little stone cave was turned on end. I did a quick count and managed to assure myself that all the fish were still in the tank (although I still haven’t found the snail). Water was everywhere.  The floor and the bed were completely soaked.

A brief interview with my sopping wet boy established that he and his friends had been wondering what would happen if they took the fish out of the water. Somehow, during that wondering, they decided it would be a good idea to pretend they were fishing. I’m still not sure how they got from “pretending” to be fishing to actually fishing…but The Boy told me they were planning to catch and eat the fish.

It seems the fish were right to be so scared.

My friend and I are fairly sure that if the boys had managed to actually catch one of the fish, her daughter would have certainly eaten it. She’s just that kind of girl. Fearless.

After a complete clothing change, including dry socks and underwear (because he was really just that wet), I gave my son a peanut butter sandwich for dinner and put him to bed early, mostly because I just had no idea what else to do. When his dad gets home from playing a gig with his band at a local vineyard, I’ll have to tell him the story and figure out what will happen tomorrow. In my best Love and Logic parent voice, I told The Boy that Daddy and I would need to discuss what his consequence would be and that we’d talk about it tomorrow…and that he should try not to worry about it.

He said, “Mama, I feel so sad because I wish I hadn’t done that to the fish tank.”

I think we are really in for it with this boy, because I find that I can’t imagine (at all!) what he is going to do next.

As I waited for George to get home and tried not to worry about the bacterial infections that our preschoolers were going to develop from the water in the fish tank, I browsed some favorite sites online and saw these Mama Merit Badges. Amazing. I would so love to hand these out to my mama friends who have had the kind of day we have just had here. Yes, my children are a blessing. Yes, I’m grateful to be a mother. But at the end of a day like this, I’d really like someone to hand me a glass of wine, some chocolate and one of these merit badges and say, “Good job! You survived.”

I didn’t see any with fish tanks on them, but maybe I can make my own. I’ve certainly earned it today.