Happy Feast Day! Our carnitas are cooking slowly in the crock pot, and I’m baking our traditional biscochitos. It seemed like a good occasion for some festive music, so I made a playlist to share. Enjoy! Un buen fiesta to you all- how are you celebrating?

(If you aren’t celebrating today’s feast, why not add it to your calendar for next year? I am giving away a copy of Haley and Daniel Stewart’s newest book, More Feasts!  It is a great place to start if you want practical ideas, recipes and activities for celebrating the feasts of the Christian year. You can still enter to win by leaving a comment on this post. Then you’ll have the carnitas recipe, too.)

Biscochitos are tiny little crispy bits of heaven by way of New Mexico. They are the state’s official cookie, and they are eaten at Christmas and other festive occasions. When we visited New Mexico two summers ago, we loved them and vowed we would make them at home. All of the recipes I could find then were a little more complicated than I could manage that year. Then last Christmas, I had less time than ever for baking (or anything, really) with the two baby twins needing my care.

This year, I am a more confident baker, and I am baking biscochitos for the feast of Our Lady of Guadalupe on December 12.

The real way to make biscochitos is to use your New Mexican great-grandmother’s recipe that has been handed down in your family (and about a pound of lard). I have no New Mexican great-grandmother, and this isn’t a family recipe. It doesn’t belong to me at all- I found it on the website for a New Mexican newspaper – but I’m adding it to my family’s traditional celebration for this feast. (No lard, though. I used butter and just a tiny bit of Crisco. Crisco is scary, but lard scares me even more.)

I love Our Lady of Guadalupe. She doesn’t belong to me, exactly…maybe no more than the cookie recipe does. Her story, though, reminds me that God always finds ways to meet us where we are and that God is big enough for all of us.

On December 9, 1531, an Aztec peasant named Juan Diego encountered the Virgin Mary at Tepeyac Hill. His people had been under the rule of Spanish conquistadores for many years, and the Christian faith had been forced upon them. When he saw the Virgin Mary, though, she looked like him: she was wearing native dress, had brown skin and features like his (instead of like the Spaniards), and spoke to him in Nahuatl, his own language. Juan Diego reported the encounter to the archbishop, who requested proof that the lady was who she claimed to be. The lady instructed him to fill his tilma (cloak) with the roses growing on the hill and take them back to the archbishop. (It was the middle of winter, so the presence of the roses was in itself miraculous.) When Juan Diego followed her directions and opened his tilma to show the roses to the archbishop, they both saw a clear image of the Virgin Mary imprinted on the fabric.

Because the Virgin Mary appeared to Juan Diego’s people as one of them and spoke to them in their own language, millions of people converted to Christianity. Where the Spaniards had tried (and failed) to force the people to accept their faith, this apparition brought a message of love and acceptance: truth isn’t the property of the people who are persecuting you, there is room for you here, and God wants you just the way you are.

In Mexico and across the United States today, there are Masses and parades and celebrations honoring Our Lady of Guadalupe. At our parish, there was a Mass at 5 AM to start the day off, and there will be a dinner with a dance this evening. At our house, there will be a feast of fajitas, queso dip, and tamales. We’ll play Mexican music and enjoy each other’s company as we remember that God is the God of everyone…including each of us, even when we aren’t looking for God. And we’ll eat biscochitos for dessert.

We cut the biscochitos in the shape of stars for Our Lady of Guadalupe. Her mantle is full of stars, like the night sky…and it’s big enough to cover all of us who want to stand beneath it. From now on, these cookies will be our way of remembering how she came to share God’s love with everyone. 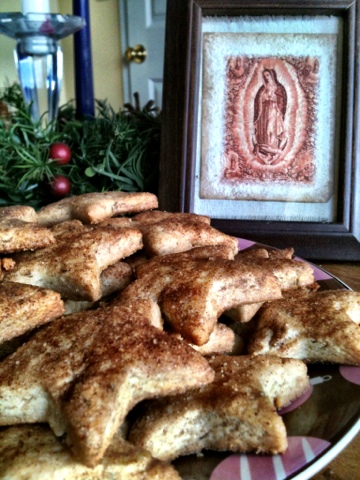